The protagonist of the game, Mr Lantern is physalis, who has the ability to contain seeds within its body. His dream is to destroy the Evil, who are destroying the tree, and to expand and plant. Mr Lantern has several friends, including Mr Poppyhead, Mrs Mushroom, Mr Twig and Mr Feather. His family and origins are unknown, but he is brave and courageous. After embarking on an adventure-filled journey to destroy the spiders and to regrow the trees, Mr Lantern encounters many wierd an wonderful creatures, living and hiding the tree. When Mr Lantern contains a seed, his body glows bright orange. The more seeds are added, the brighter the glow, until it is blindingly white. By then, he holds the ability to destroy spiders. Once the seed has left his body, the power and the glow disappear. Mr Lantern speaks the same language as his friends and the other creatures he encounters. 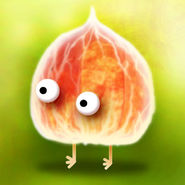 On the game icon
Add a photo to this gallery
Retrieved from "https://botanicula.fandom.com/wiki/Mr_Lantern?oldid=4124"
Community content is available under CC-BY-SA unless otherwise noted.